The Nameless detective investigates a locked room mystery about mystery books…Nameless wasn’t supposed to come into the office on Mondays: he certainly wasn’t supposed to answer the phone. On this Monday, he did both. The call was from Barney Rivera at Great Western Insurance – once upon a time a friend, now despised. Against his better judgment, Nameless agreed to take Rivera’s case: a multimillionaire who collects rare books had reported the theft of eight volumes worth a half-million dollars. From a locked library. To which the collector has the only key. The books were all ultrarare detective fiction titles, making the crime a locked-room mystery about mysteries. Nameless soon realized why Rivera had called him: he expected to have the last laugh when Nameless failed to solve the puzzle. This particular Monday brought a second oddball case to the agency – the Henderson brothers were being stalked for unknown reasons. Someone had poured acid over their late father’s headstone and his disinterred ashes, leaving behind a warning that this was just the beginning. Searching for peace of mind and the distraction of work, Jake Runyon, the agency’s field operative, sets out to bring an end to the brothers’ terror. The shrewd – and deadly – schemers with whom Nameless and Jake find themselves dealing will stop at nothing to achieve their ends. Including murder – both in and out of locked rooms. Fine in Fine dustjacket 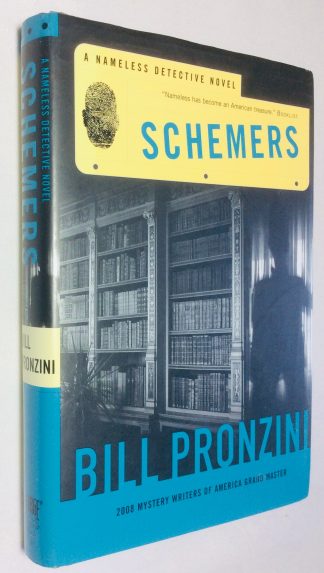 You're viewing: Schemers: A Nameless Detective Novel £12.00
Add to basket